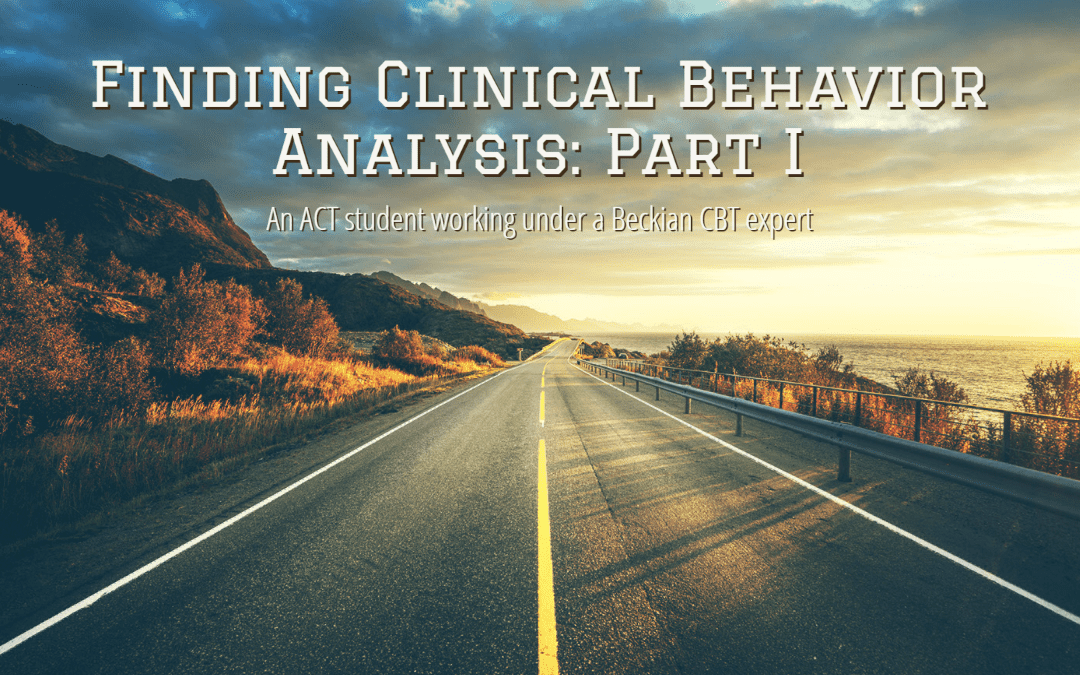 My training path has been long and winding – all with the intention of finding ways to improve clinical treatment. You see, I grew up with a close family member experiencing a great deal of impairment, emotional pain, and later addiction. I was present for years of this family member seeking treatment and even as a child seeing failures in the systems meant to help her. I watched her go through the revolving door of inpatient units, which became like brief vacations to her. I watched as therapists seemed helpless to soothe her pain. And, I watched as she was prescribed pill after pill to ease her pain. I was at an early age effectively an involuntary ‘mental health’ crisis worker.

This led to a passion for understanding human behavior and a desire to find better ways to address human suffering. I believed that I could best influence treatment by becoming a process and outcomes researcher and set upon a long path to become this. I spent a number of years gaining experience on process and outcomes studies at a number of major research institutions in Houston, Texas where I lived. Then I happened upon on a job as a Research Coordinator for a project called “Opportunity Houston.” This was a large grant focused on treating dual diagnosis (mental health + addiction) homeless individuals. The study focused in some respects on enriching the environments of those experiencing addiction by providing housing and work, contingent on improving maintenance of sobriety. I later learned this was a study in part of Kelly Wilson’s design, an ACT founder. At the time, I would not have known who he was but the William “Dub” Norwood was my advisor there and he was an early ACT devotee.

It was through him that I began to be exposed to ACT and then entered the University of Houston – Clear Lake for my master’s in Clinical Psychology. Following this, I started my doctorate in Clinical Psychology under Rob Zettle, Steve Hayes’ first student who played a strong role in developing ACT back when it was called “Comprehensive Distancing.” Throughout my master’s I found myself drawn to ACT, in its stance that human suffering was a natural part of the human experience and often an extension of otherwise adaptive behavior. In my early exposures to Beckian Cognitive Behavior Therapy, I was often presented with a list of ‘cognitive distortions’ and told that treatment would in part be helping clients recognize their ‘cognitive distortions.’ At the time, I found this conceptualization offensive and insensitive. I could not imagine myself telling other humans experiencing pain that their painful thoughts were ‘distortions’ of reality.

I would say that the way that clinical psychology training is currently structured – learning deeply the key elements of treatment is not an easy experience. We are typically taught behavioral principles but soon after we begin to divide off into camps to learn the particular language ways of our chosen orientations. I broke from this tradition repeatedly because beyond my allegiance to “ACT” was the guiding rule that my mission was to find ways to understand and improve treatment as a process researcher. I became more fluid in ACT treatment and began to depart from “canned ACT” in the early years of my doctorate. I had early experiences of clients with Obsessive-Compulsive Disorder” finding ways to “compulse” (momentarily avoid or reduce their anxiety) with the very ACT exercises I provided them. One client taught mindfulness, returned the next week to tell me how effective mindfulness had been in reducing their anxiety. I asked what had occurred and the client recounted engaging in mindfulness ‘instead of’ compulsions each time they became anxious.

I went back to Rob and told him what had occurred and in his monotone way of beating a dead horse for my benefit he said ‘Yes, of course.’ And, then followed it with the ‘Hole in the Field’ metaphor to illustrate how I’d simply given the client a new shovel. Now, I would need to again – get them to drop their new improved ‘shovel.’ This was all in the context of learning Exposure and Response Prevention (ERP) also known within the behavior analytic community still as desensitization.

It was working in OCD and specializing in a particular technique that was widely endorsed across theoretical orientations as the ‘gold standard’ (i.e., ERP) for treating anxiety and related disorders that allowed me, I believe, to be able to track more about the differences in models as a I learned. After learning this technique well embedded in ACT, I sought out an Advanced Assistantship with the closest highly regarded research and treatment specialty center in Kansas. My clinical supervisor was widely regarded as a highly-skilled Beckian Cognitive Behavioral Therapy clinician and researcher. My initial learning experiences here were somewhat disorienting; however, as I went in with experience and skill validated by ACT experts. Fairly quickly into my training at this center, it became clear that ACT was not particularly favored by my supervisor and to treat clients under her supervision using similar language was quick to elicit punishment.

I remember writing back to my lab at that time and questioning whether I was actually proficient in ERP and ACT. The response I received was telling – but for years I did not fully understand the impact of what I was told in the full context of my academic experience. Rob told me that my ACT and ERP was fine and that I would simply have to ‘learn their language.’ He mentioned that as Steve Hayes’ first student he was also sent to work under the competing theoretical model for his internship year – under Aaron Beck. Though he never disclosed much about this experience directly it often seemed apparent that his internship year had probably not been easy on him.

I’d like to say that I won this particular CBT expert over; in fact, I learned the language and got out as soon as possible. I seemed to be fighting a battle far bigger than myself with zero footing as a new mother of a 4-month old just pre-internship. From here, I moved onto working at Rogers Memorial Hospital under Brad Reimann and running the day-to-day clinical management of an adult Intensive Outpatient Program for OCD in Oconomowoc, Wisconsin. By that time, I had mastered the CBT language and found myself commended and promoted for my treatment skill.