An ACT Approach to Adolescent Suicide 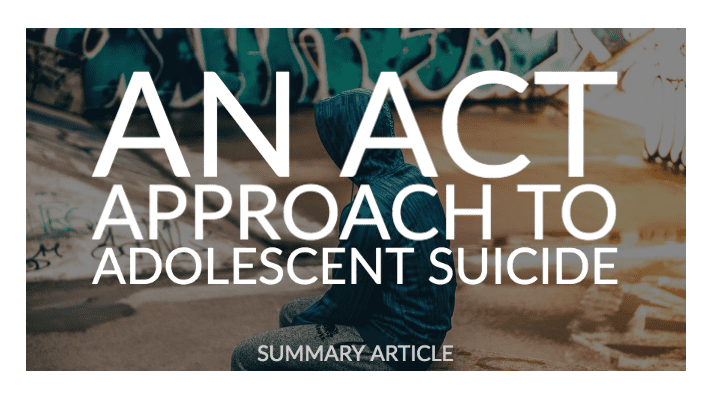 The paper summarized here, was written by myself and former students (Al-Jabari, Moyer, Novamo, and Connally), and published in the International Journal of Behavioral Consultation and Therapy in 2014 examines the problem of adolescent suicide from an Acceptance and Commitment Therapy (ACT) practitioner’s perspective. At the time of the paper’s publication, according to the Centers for Disease Control and Prevention (2014), approximately 4,600 young people completed suicide annually in the United States. At the time of this summary, that number is nearly 7,000 (Centers for Disease Control and Prevention, 2019). I chose to summarize this paper for two reasons: I wish that number were moving in the opposite direction, and I think the conceptualization written about here is useful.

Of course, more adolescents attempt suicide and have ideation about suicide than complete it. Those youth are important to discuss from a functional contextual point of view, and that is what this article does. It is divided into seven major sections. The first section discusses the prevalence, antecedents, and consequences of adolescent suicidal behavior. The second introduces experiential avoidance, and the third introduces the ACT model. The next section is “the heart” of the paper, giving an ACT conceptualization of adolescent suicidal behavior. The next two sections talk about a specific client, first hypothetically and then with a case example. The final section summarizes the state of relevant empirical evidence to date (at the time of publication). Here I will cover just a bit of each section, so you get a feel for the article’s content. I am biased, but I think you should give it a read.

The article states that there are some behaviors (e.g., substance abuse) that co-occur with and may predict suicidal ideation and attempt, but there are also individuals who have no previous diagnosis who have suicidal behavior. It is obvious, therefore, that there is no set pattern or easy prediction – with one caveat. Past behavior is the best predictor of future behavior. The costs of suicidal behavior are great. According to Yang and Lester (2007), every year in the United States alone, non-fatal suicide attempts cost about 4.72 billion dollars. The consequences go far beyond money, though. The article talks of cluster suicides, survivor guilt, and worsening negative emotional experiences.

This leads into the discussion of experiential avoidance (EA), noting that attempts to control, suppress, lessen, or avoid those negative emotions (or thoughts, bodily sensations, and/or places that might make them more likely) may worsen distress. Next, ACT is introduced as a treatment to address EA. In both the section on EA and the section on ACT, assumptions of functional contextualism are addressed (e.g., all behaviors serve specific purposes in specific settings). This is the perfect segue to Chiles and Strosahl’s (2005) definition of suicidal behavior as learned behavior that functions as an avoidance of – or escape from – negative emotions.

In brief, ACT views suicide as a perfectly reasonable solution to feeling stuck or hopeless. Suicidal behavior is seen as the result of normative human language and cognition processes. The article states that normalizing suicidal behavior shifts the therapeutic context to an open and honest one that may help reduce client shame. Just as a little teaser, there is a discussion about relational framing related to thoughts of suicide and how that may bring relief. There are several intervention strategies suggested (e.g., values with specific future-oriented goals). The hypothetical client is used as a way to provide context for how suicidal behavior, in general, might be discussed. The issues of safety planning and contracting are discussed in this section as well.

The ACT approach to these issues is different from many other clinical takes; if you don’t know it, you might find it an interesting read. A de-identified client example illustrating how defusion, values and several other ACT components were used to address suicidal behavior is the last section before empirical evidence is provided. The case example illustrates that, as is often the case, the client remains quite anxious yet she is living out her values more and thinking of suicide less.

The data summary indicated the need for research on suicidal behavior. This is still a particular need. Fortunately, however, in the last six years the evidence for ACT with adolescents has increased. Since this paper was written, there have been 10 randomized controlled trials with participants under the age of 18. For details, see the Association for Contextual Behavioral Sciences State of the Evidence Page.